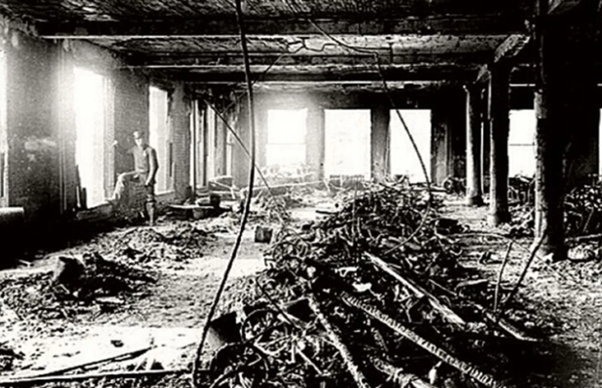 Every piece of legislation protects a country’s citizens, but some of them were crafted out of the failure to do so. Case in point: the historical fires that shaped the building codes we have today. It’s all about learning to pick up lessons from tragic events. Here are some tragic stories from the past that pushed forward the drafting of better building codes.

The Triangle Shirtwaist Factory was located on the 8th, 9th, and 10th floors of the Asch Building in Manhattan, housing hundreds of garment workers. The majority of the workers were recent Jewish and Italian immigrant girls and women between the ages of 14 and 23.

It was a common practice back then to lock the doors to the stairwells and exits on each floor level during work hours. This was to prevent workers from taking unpermitted breaks and to reduce incidents of theft. Unfortunately, a fire flared up from one of the cutter’s trash bins. The fire quickly grew, and the workers had no way out. Some of them jumped out of the windows out of desperation to escape.

The tragedy resulted in the death of 146 garment workers.

Cocoanut Grove used to be one of the most popular nightclubs in Boston, Massachusetts, during the time of the Second World War. This is where the deadliest nightclub fire in the history of the country would take place. On November 28, 1942, the crowd was packed at Cocoanut Grove. In fact, the number of people that night was twice the legal capacity of the club.

Some of the club’s exit doors were locked to bar unauthorized entry. The club’s iconic palm tree decor was made of flammable materials, and due to the shortage of Freon because of the war, air conditioning units were run on Methyl Chloride, which is highly flammable.

Later that night, chaos ensued after a fire broke out due to an electrical short and was fueled by the methyl chloride that filled the club. Unable to escape due to the locked doors, 492 people died that night.

The fourth deadliest nightclub fire in history happened at The Station in Rhode Island on February 23, 2003. The cause of the fire was a pyrotechnics display that created sparks that ignited the acoustic foam in the walls and ceiling surrounding the stage. It reached flashover within one minute, causing all combustible materials to burn. Intense black smoke engulfed the club within two minutes.

The 400 people in attendance that night rushed towards the main exit to escape the toxic black smoke quickly filling the club. Unfortunately, that many people rushing towards a small exit door caused an even bigger disaster. Firefighters had to spend hours trying to pull out bodies piled up at the entrance, 96 of them dead.

The deadly aftermath of these tragedies heavily influenced the safety standards under the National Fire Protection Association’s Life Safety Code especially provisions about egress and fire doors including their regular inspection.